Is He Scared Of Commitment? 5 Steps To Win Him Over

You are here: Home / Deals / Psychic Readings / Is He Scared Of Commitment? 5 Steps To Win Him Over 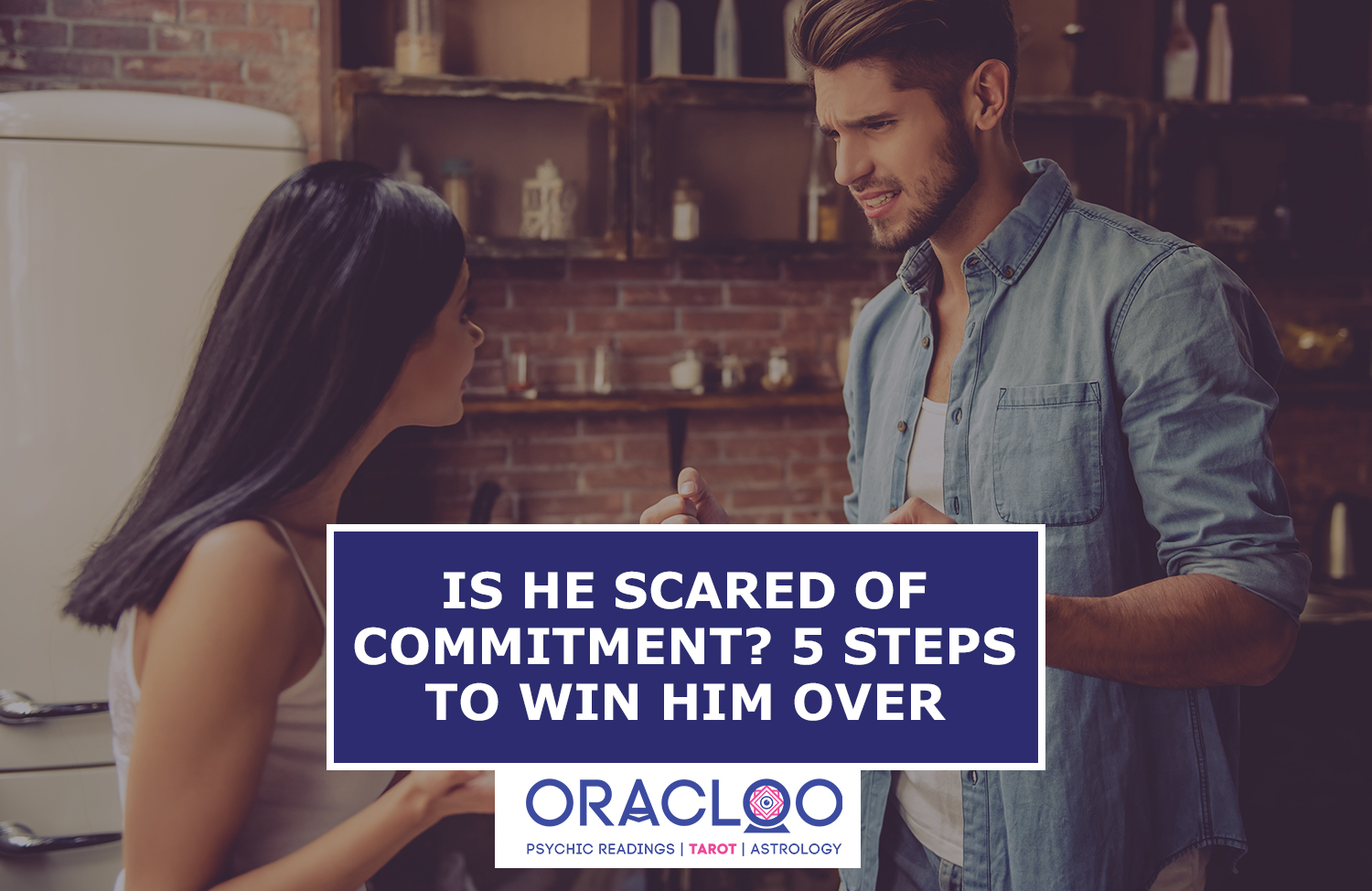 Is He Scared of Commitment? 5 Steps to Win Him Over

Does it seem as though he has the same feelings for you as you do for him, but commitment is not on his cards? He might not be ready to take the next step!

After many years of experience as a psychic reader and after talking to many clients about their relationship issues I have noticed that there are three main reasons why men don’t want to commit.

The three reasons he doesn’t commit

Firstly, he is not as into you as you think. Secondly, he just isn’t ready to commit to anyone no matter how much he likes them. Thirdly he doesn’t think he is financially stable enough to build his nest. Here is the bad news; it’s hard to make him change his mind if he falls into one of these three categories. But the question is, why would you want to be with someone who can’t offer you what you want?

However, if he is not against getting married and is open to marriage in the future – there is still hope. With a little work, you can change his mind. If you are determined to marry him, you can follow these five steps for bringing him closer to popping the question.

Step 1: Don’t press him or he’ll run away

Rule number one and the king, queen, and prince of all rules: no pressure, no ultimatums. Your hurry will not serve you but instead will work against your primary goal and possibly result in pushing him further away. Keep living as though the idea of marriage had never entered your mind, while you smartly move to the next steps.

Associate yourselves with happily married couples. Hang out with him as much as you can, to show him that happy marriages are not just possible, but also what happens to real people.

Have your friends do the job for you, by asking him whether the time for marriage has arrived. Listen carefully to everything he says. Men are competitive by nature, and when surrounded by other men who are successfully married, he will start telling himself that he also wants to be so happy with his partner. Bingo!

SPEAK TO A PSYCHIC EXPERT NOW.
THE FIRST 3 MINUTES ARE FREE

Step 3: Keep your parents away

Unless you come from a cultural background where family plays a central role, this is not the right time to show him what life would be like with an intrusive mother-in-law or a possessive father-in-law! This is a delicate and romantic moment, and you need to make sure it is all about you two!

Men are usually frightened by the idea of being examined by your parents and family. You need to do your best to try to avoid creating such a state of anxiety. Of course, the family will need to be involved, but wait for him to be ready for this.

Step 4:  The Little Geisha and other sexual fantasies

Far from suggesting being something you are not if you’re comfortable try to play with his sexual fantasies – within the limits of your comfort zone and desires. Make sure he sees that you like him a lot, and are willing to commit to a not-so-boring sexual routine – whatever this means for you.

He is not just marrying you; he is marrying someone he is committed to making love to for the rest of his life – so it better be interesting!

5. Final Step: Create The Perfect Opportunity For Him To Pop The Question

Now that you feel that the proposal might be in the air, you need to do your best to “close” the deal – in other words, facilitate him asking the question.

The solution? Run a marathon of romantic comedies with happy endings and make sure your friends are going to help.

Want to get clarity on your relationship? Book a psychic reading today with our team of advisors and get the answers you deserve. We have a selection of world-class psychic readers, clairvoyants, and medium here 24/7 to help you!

I am a god gifted, honest, natural born psychic blessed with spiritual powers and an aura healer. I am a strong believer in powers and have practised reading people’s love life, career and finances to help with my healing powers.

Call Is He Scared Of Commitment? 5 Steps To Win Him Over |

Tarot of The Week: The Emperor

Tarot of The Week: The Fool
This website uses cookies. By continuing to browse the site, you are agreeing to our use of cookies
Scroll to top