You are here: Home / The Hierophant Tarot Card 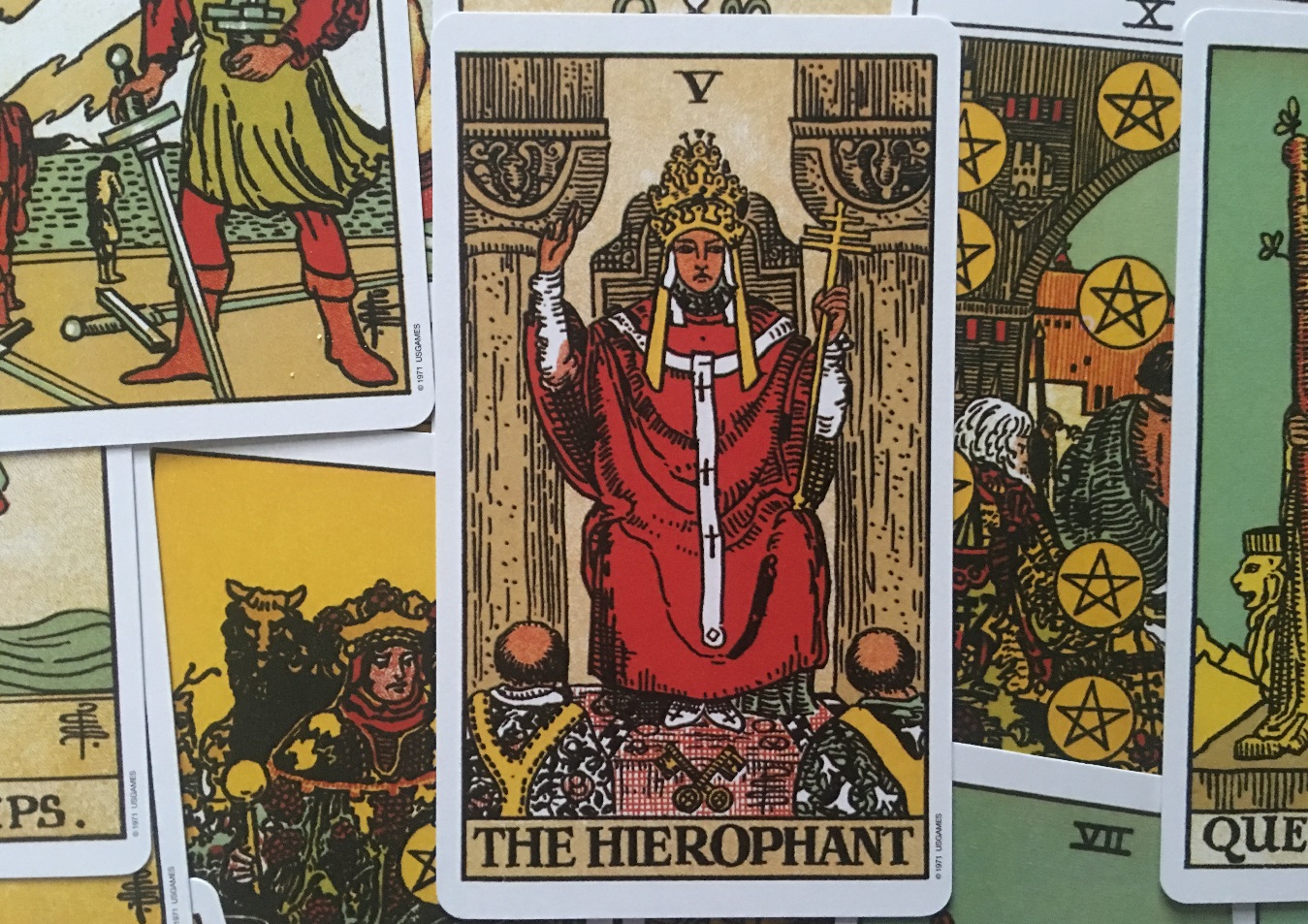 Similar to the High Priestess, the Hierophant tarot card sits between the two settlers of Solomon’s temple. The hierophant is dressed mostly in blue and gold, the colours of wisdom and spirit, but not without a touch of red, expressing the active and combative aspect of faith. The symbolic meaning of this tarot card is centred around spiritual authority, wisdom and good advice. The hierophant is a male figure who is equally authoritative to the Emperor card. The Hierophant tarot cards represents the clairvoyant  ability of a mature man, one who has reached the peak of his potential to the point that he can even to step back and observe the existence space with happiness and wisdom.

The serene composure of the figure shifts the emphasis of the psychic reading to spiritual matters. The Hierophant signals a benevolent and forgiving authority, protection and a moral orientation that can dissipate all doubts. This card can mean that a problem suddenly becomes clear or a question comes together thanks to mysterious and beneficial influences. The Hierophant card is the mediator for excellence, the influential and infallible protector, guarantor of diplomacy and law, as well as beneficial contact with the environment and especially with young people. This tarot card tells us about everything concerning the sacred, religion, tradition, vocation and forgiveness. It urges you to have respect for authority and tells us that traditional values are favoured at this time. Are you considering a taking a specific course of action at this time? This card lets us know that the action will prove to be fruitful only if it is carried out with the utmost commitment, determination and without any selfish aspect. Often it can indicate an authoritative man with a strong moral compass, capable of understanding and giving good advice.

It represents the mediation of influential people in a business deal, diplomacy, law, and teaching.

The Hierophant tarot card is expressed rapidly (up to a maximum of fifteen days) but has no lasting influence (maximum one month).

When the Hierophant tarot card is reversed it is a heavy arcana tarot, where faith becomes a lack of faith and the serene wisdom of the pontiff an inability to challenge them. The morality that served as a guide and criterion of discernment is now lawlessness and injustice committed to the detriment of others. It can also show the reader self- destructive instincts, masochism, inordinate fears, anxiety, distress, persecution complex and sense of inferiority, represent a fake person or that the person having the reading is struggling to forgive.