You are here: Home / The Devil Tarot Card 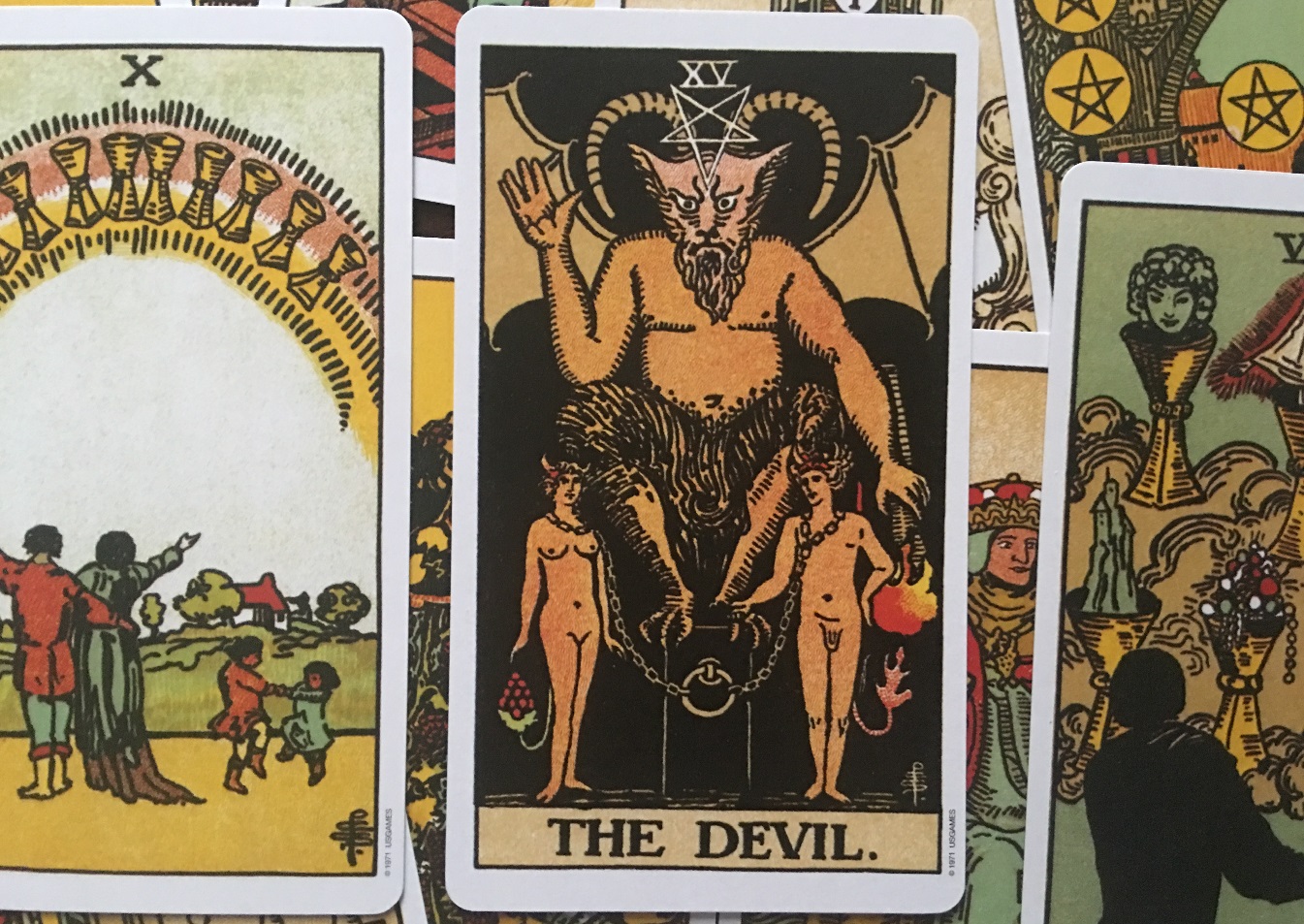 The Devil is represented in the tarot deck with a terrifying figure – head and legs of a goat, hairy hips and female breasts. Its colours are unattractive too – yellow legs and a red chest with a white head. This alludes to the four elements of the cosmos, the earth, the water, the air and the fire. The Devil is formed by two characters of different polarity representing the yin and yang. He is chained to a pedestal from which he seems to dominate men and their fate with a triumphant smile. The tarot card also has a representation of a snake next to the Devil. The snake is biting its tail symbolising eternity and the alternating cycles of death and rebirth. This tarot card also strongly relates to sexuality, ambition and desire for power.

The Devil tarot card is, however, not as black as it seems as it is easily overturned by neighbour tarot cards and can also represent energy, magnetism, magical and hypnotic powers. All of these elements empower the consultant to influence others and to be a master of his/her destiny. The clairvoyant is shown that the consultant uses their abilities to exercise power over the weak, something drawing resources from his charisma and abilities. When the Devil tarot card appears, everything becomes possible – unexpected events, abrupt changes in the situation, brilliant success and achievements. It also shows that these can be obtained via unorthodox means and a lack of morality. There is agreement that with this card the consultant must be living an important moment in their life and the Devil tarot card brings great energy, determination, and mental and physical energy. Sexuality is very strong and experienced intensively by the consultant. The tarot can also signify to the clairvoyant salary increases, economic well-being, successful due to money speculation, and the materialisation of a project.

New exciting, and intense experiences often of clandestine nature, and merely based on sexual pleasure only. The Devil tarot card brings charm, passion, strong appeal, intense sexuality that has to be seen outside of common scenarios, such as a relationship started out of benefits (money and prestige) rather than real affection. The clairvoyant must not rule out a liberation from a now unwanted relationship that the consultant had not the courage to break off.

Great opportunities supported by uncommon abilities. A big success reported in the financial or military arena.

A medium-term card (from one to three months) whose qualitative event lasts for a very long time (up to five/ six months).

When reversed, the Devil tarot card shows the clairvoyant that the consultant is going through a negative situation filled with danger that has its roots in choices and attitudes of the past. The tarot brings to the consultant energy shortages, discontinuity, laziness, dependency on others, and fear of responsibility and of the unknown – in other words the triumph of the evil. It shows an imbalance and absolute lack of rules, especially in sexual matters where perversion reigns. The card can also show the start of a period that is full of misfortunes, dangers and complications of all sorts.